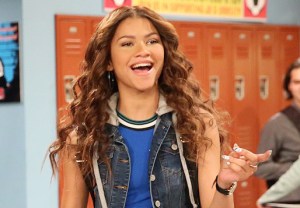 K.C. Undercover is spying… many more secret missions to come.

The Zendaya-fronted Disney Channel espionage comedy has been renewed for Season 2, TVLine has learned exclusively, having ranked as TV’s No. 1 series among the Kids 2-11 and 6-11 demos since its January premiere.

In addition to Zendaya, who is also a co-producer on the series, K.C. Undercover stars Kadeem Hardison, Tammy Townsend, Kamil McFadden, Trinitee Stokes and Veronica Dunne.

The renewal news comes two weeks before the show’s “Double Crossed Weekend,” in which one storyline will unfold over three suspenseful nights, beginning with a one-hour special airing Friday, May 29 at 8/7c and guest-starring Teen Beach 2‘s Ross Butler.

Here’s a first look at “Double Crossed Weekend,” which among other twists serves up double the Zendaya, thanks to a nefarious plot to replace K.C. with (mwa-ha-ha!) an evil twin.