The Vampire Diaries might be one of the most romance-heavy shows on TV, but after Thursday’s season finale — which killed Jo and Liv, then laid to Elena to (temporary) rest — there’s really only one couple still standing in Mystic Falls: Stefan and Caroline, and even that remains a slow burn.

TVLine caught up with Candice Accola this week on the red carpet at The CW’s upfront presentation for her thoughts on Stefan and Caroline, including whether or not she’s potentially ready to be one half of the series’ main — and, as previously noted, only — couple. (Note: This interview was conducted before the season finale aired.) 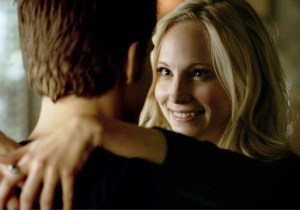 “It’s a nice payoff to see them together,” Accola said, adding, “I like that she’s taking that time for herself. I think it shows maturity in her character.”

As for why Caroline didn’t immediately return Stefan’s declaration of love in the finale, executive producer Caroline Dries tells TVLine, “She’s still coping after her mother’s death and her humanity being off; she’s not feeling like herself. In Season 7, she’s going to try and figure out if she and Stefan can actually do this.”

While you wait patiently (lol) for Season 7 to arrive, hit PLAY on our interview with Accola above, then drop a comment below: What do you hope to see from Stefan and Caroline this fall?