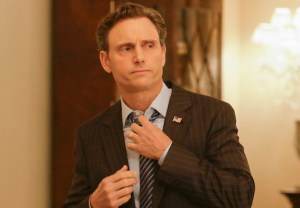 ABC’s Scandal wrapped Season 4 on Thursday night with 8.1 million viewers and a 2.3 demo rating, ticking up 10 percent and a tenth week-to-week, but down 24 and 32 percent from last year’s finale (which closed the night at 10 pm).

THE CW | The Vampire Diaries (1.5 mil/0.7) ticked up, and was off just a tenth from its previous finale. Reign (870K/0.4) was down in audience vs. its freshman finale but matched the demo rating.