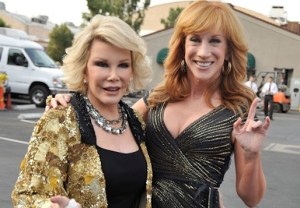 That sound you hear is yet another pile of, well, something hitting the fan at Fashion Police.

“She kind of s–t all over my mother’s legacy in her statement on leaving. And I know that was not an intentional reading of it, but that’s how I felt,” Rivers, who also serves as executive producer of E!’s red-carpet commentary show, said during a Q&A session to promote her new memoir at Manhattan’s 92nd Street Y. “Everything was so heightened and everybody was so crazy, but that was my takeaway.”

Griffin, who took the hosting gig last December, stepped down in March, giving a lengthy explanation via social media that was critical of Fashion Police‘s mission. “I thought that I could bring my brand of humor to Fashion Police so that beautiful people in beautiful dresses could be teased when appropriate,” Griffin wrote, adding, “I do not want to use my comedy to contribute to a culture of unattainable perfectionism and intolerance towards difference.” (Read her full statement here.)

“Just like a family, when the matriarch dies, the sisters started fighting, someone tried to marry in, not a great match, live and learn,” Rivers said in assessing Fashion Police‘s less-than-ideal 2015.

Rivers said she has just recently begun “creative meetings” to “reformat” the show, and added that she imagined her mother having “a little bit of twinkle in her eye” looking down on the show’s woes and grumbling, “You couldn’t do it without me, could you?”

Do you agree with Rivers’ comments about Griffin’s exit? Should this be the final word on the Fashion Police Controversy of 2015? Sound off in the comments!