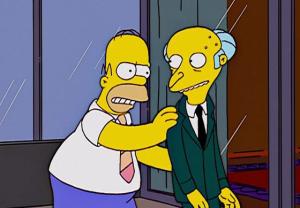 The Simpsons just delivered a message to castmember Harry Shearer and here’s the loose translation: “Eat my shorts!”

Shearer, the voice behind such characters as Mr. Burns, Ned Flanders, Waylon Smithers and Principal Skinner, is leaving the show amid a contract dispute.

“Harry Shearer was offered the same deal the rest of the cast accepted, and passed,” exec producer Al Jean said in a statement to the New York Times. “The show will go on and we wish him well. Maggie took it hard. We do not plan to kill off characters like Burns and Flanders but will recast with the finest voiceover talent available.”

Late Wednesday, Shearer took to Twitter to confirm that his contract was not being renewed. (Fox recently picked up The Simpsons for Seasons 27 and 28.) Quoting Simpsons EP James L. Brooks’ attorney, tweeted, “Show will go on, Harry will not be part of it, wish him the best.” Shearer then added: “This because I wanted what we’ve always had: the freedom to do other work.”

UPDATE: Brooks took to Twitter Wednesday afternoon to say that talks were still ongoing with Shearer: