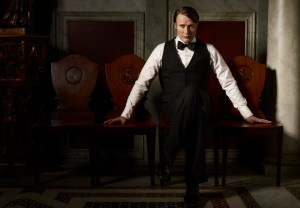 Hungry for Season 3 of Hannibal? (Yes, that was a reference to the show’s museum-quality/bile-evoking “cooking” segments.)

Well, you’re in luck! We’ve got your first look at NBC’s official cast shots – including the now-series regular Gillian Anderson as the enigmatic Bedelia du Maurier.

TVLine also reported earlier this year that NBC’s acclaimed thriller will introduce Nina Arianda as the wife of Hugh Dancy’s Will — but not until Episode 8… an installment that will leap enough years into the future to allow for the transformation in Will’s personal life.