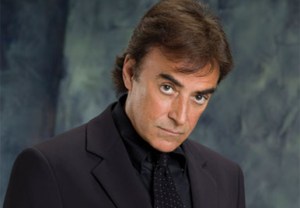 Pack your bags, Thaao Penghlis: You’re headed back to Salem.

The Days of Our Lives fan favorite, who has appeared on the soap since 1981, is set to reprise his role as Andre DiMera, TVLine has confirmed.

Further details about Penghlis’ return — including when his episodes will air — are not yet available.

Meanwhile, soap vet A Martinez (Santa Barbara, General Hospital) is joining Days in the new role of Eduardo, who, according to Soap Opera Digest, “will have many connections in Salem.”

* The final three episodes of The Late Show With David Letterman will feature appearances by Tom Hanks, Eddie Vedder and Bill Murray, who was Letterman’s first guest on Aug. 30, 1993.