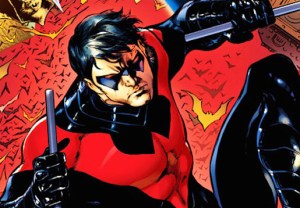 Recently installed TNT president Kevin Reilly knows he has something special in a live-action adaptation of the Teen Titans superhero property, and as such, patience is a virtue.

Announced back in September, not much has been officially confirmed about the pilot, which follows a group of young superheroes led by Dick Grayson aka Batman’s sidekick Robin, who is fated to become Nightwing. Oscar winner Akiva Goldsman (A Beautiful Mind) penned the pilot with Marc Haimes, and Nerdist.com has reported that the titular team will also include Barbara Gordon, Hawk/Hank Hall and Dove/Dawn Granger, Raven/Rachel Roth and the alien princess Starfire.

Asked for a status report on the project, Reilly told TVLine at TNT’s Upfronts luncheon, “Akiva’s been very busy doing some other things,” but it’s his hope that “maybe this summer” they will lock casting and ramp up production.

After all, the small screen hardly has been lacking for comic books-based fare. So there is a concerted effort for TNT to take its time and make this series unique.

“I sat down with Akiva and said — and he ultimately agreed — that the [TV] landscape right now is well-serviced on the superhero front. So what space is this going to inhabit?” Reilly related. “And really what he wants to do is be very true” to the source material.

As Reilly noted, Teen Titans “was a groundbreaking property when it first started,” so there is an opportunity here to set the TNT pilot — to either be titled Titans or Blackbirds, based on which rumor you subscribe to — apart from the ever-growing superhero pack. “There were consequences to things that happened; it wasn’t somebody died and they moved on. There was the first superhero to be an addict [in Roy Harper’s Speedy]. It’s a coming-of-age story for Robin, who feels like Batman has betrayed him.”