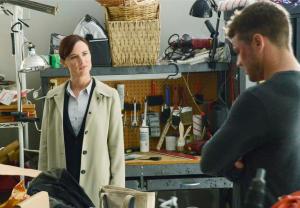 Secrets and Lies will give Nashville a winter breather next season.

During a conference call with reporters to discuss ABC’s new 2015-16 schedule, network president Paul Lee announced that Season 2 of the mystery-drama will air Wednesdays at 10/9c during Nashville‘s midseason break.

As previously reported, Juliette Lewis’ unflappable and formidable Detective Andrea Cornell will be the only character returning for the show’s second season.

Other midseason ABC moves: Shonda Rhimes’ new series The Catch will take over How to Get Away With Murder‘s Thursday-at-10/9 slot when the Viola Davis thriller completes its 15-episode second season; Galavant once again will bridge the gap between Once Upon a Time‘s fall and winter runs; new comedy The Real O’Neals will air Tuesdays at 8:30 in early ’16 (Fresh Off the Boat will reclaim its 8/7 perch); the new Joan Allen thriller The Family will replace Of Kings and Prophets on Sundays at 10/9c; and murder mystery Wicked City will air Tuesdays at 10/9c during Quantico‘s winter hiatus.