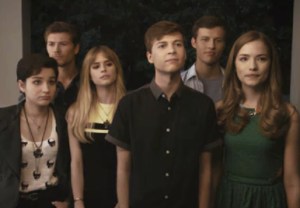 I scream, you scream, we all scream for… MTV’s Scream.

The cabler has released a new promo for its upcoming horror series, in which the stars of Awkward, Faking It, Teen Wolf, Finding Carter, Ridiculousness and The Challenge attend a killer summer party. (See what we did there?)

Scream debuts Tuesday, June 30, at 10/9c. Watch the (rather bloody) promo below:

* Stephanie Mills, who portrayed Dorothy in the original Broadway production of The Wiz, will play Aunt Em in NBC’s upcoming live performance. The network, meanwhile, is conducting a talent search to find a fresh face who will play Dorothy.

* Next year’s Grammy Awards will be broadcast on a Monday for the first time, airing Feb. 15 on CBS.

* Lifetime has greenlit My Sweet Audrina, an adaptation of the novel by Flowers in the Attic author V.C. Andrews. Per The Hollywood Reporter, India Eisley (The Secret Life of the American Teenager) will star in the TV movie, which centers on a young girl who is unable to recall past events in her life.

* Netflix has released a new trailer for the third season of Orange Is the New Black, bowing June 12. Among the highlights: Poussey struggles to keep her chin up, Piper describes what really goes down behind Litchfield’s closed doors and Crazy Eyes delivers a harsh truth about Santa Claus. Check it out below.