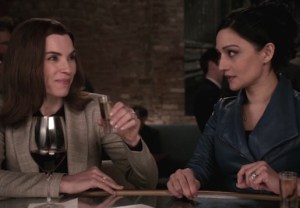 CBS’ The Good Wife wrapped Season 6 on Sunday night with 9.2 million total viewers and a 1.2 demo rating, rising 10 and 33 percent week-to-week to hit its best numbers since Jan. 11 and match its year-ago finale.

TVLine readers gave the closer — which featured the first Alicia/Kalinda scene in a small eternity, as Archie Panjabi exited the series — an average grade of “B.”

Leading out of that, the cancelled Battle Creek (6.4 mil/0.8) ticked up a tenth.