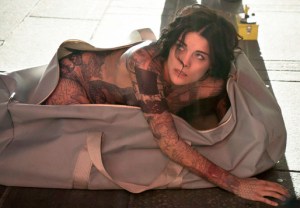 In addition to announcing its fall 2015 schedule, NBC kicked off Upfronts Week on Sunday by releasing trailers for its new series, including prolific producer Greg Berlanti’s drama Blindspot, the Wesley Snipes thriller The Player and the comedy People Are Talking, featuring Mark-Paul Gosselaar and Meaghan Rath.

Thoughts on NBC’s fall offerings? Drop a comment with your reviews of the trailers below.