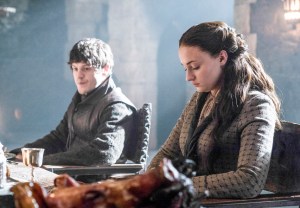 Ramsay Bolton: Such a sadistic jerk, such an accomplished dinner party conversationalist.

This week’s Game of Thrones finds Roose Bolton’s bastard taking every opportunity to make two of his least comfortable meal companions feel even less at home — and while his behavior is terrible and his motivation deplorable, God help me, I kind of enjoyed it. (Yes, I’m probably going to hell, and yes, Cersei, I’ll make sure the bar is stocked before you get there.)

Let’s take a look at what happens in “Kill the Boy.”

HOUSE STARK | Ramsay’s lady, Miranda, is jealous of the attention he pays to his betrothed. “Do you think she’s pretty?” she asks. (Watch how you answer, Ramsay; Miranda may take that razor-sharp hipbone of hers and slice you somewhere sensitive.) Her jealousy bores him, “And you remember what happens to people who bore me,” he warns. Then they have angry, standing-up sex in front of a window.

The nice old lady servant from a few episodes back gets a message to Sansa. “You still have friends in the north. If you’re ever in trouble, light a candle in the highest window of the northern tower. You are not alone,” she says, and the elder Stark daughter looks appropriately skeptical. If I were Sansa, I wouldn’t trust anyone about anything, anytime. (Is this the message we hear Brienne asking a man to take to Sansa, or a ploy designed to hurt Ned and Catelyn’s kid? Thoughts?)

Take, for instance, Miranda, who acts like she’s befriending Sansa but then leads her directly to Reek’s kennel cage, forcing their reunion. “Theon,” she says in shock, but he just shakes his head. He later confesses the encounter to Ramsay, who pretends to forgive him for keeping secrets but who engages in the aforementioned rude behavior at a family dinner with Walda, Roose and Sansa. He calls Reek in to pour more wine and mocks them both, then forces the Dung Heap Formerly Known as Theon (who was kind of a dung heap even before) to apologize to Sansa for murdering her two brothers. Then he informs Sansa that Reek will be giving her away at the wedding. But wait, Ramsay, your dad is about to prove you are but a dilettante in the ways of the mindf—k: He and Walda announce that they are expecting a baby, and they’re fairly certain it’s a boy. (This, of course, threatens Ramsay’s position in the family lineage.)

HOUSE TARGARYEN | Barristan Selmy did not survive the alley brawl, “butchered by cowards who hide behind masks,” Daenerys notes as she sheds tears over his body. She commands that all the leaders of Meereen’s great families be brought before her — even the one who’s on her council of advisors. With a calm face and absolutely no figs given, she has the family heads marched before her dragons and pushes one man forward to be flambéed alive and torn in half by her hungry “children.” It makes a point. (Her advisor is safe, however.)

“But what about Grey Worm,” you ask? He survived the fight but says he “failed” Barristan, Daenerys and everyone who depended on him. His last thoughts as he went down, he tells Missandei, is that he’d never see her again. And so she lays beside him and kisses him gently. (I guess we’ll get back to that whole why-would-an-Unsullied-be-in-a-brothel thing from a few episodes ago when he’s all healed up, eh?)

Dany meets with her imprisoned advisor and announces that she was wrong; she’ll reopen the fighting pits to free men. And she’ll marry the leader of an old Meereenese family. “Thankfully, a suitor is already on his knees.” (Heh.) Congrats, dude: You’re not only going to live, you’re going to be Mr. Mother of Dragons!

PHOTOS Quotes of the Week From Game of Thrones

THE MEN OF THE WALL | Maester Aemon receives a dispatch about Dany’s growing problems and laments that he is so far away. “A Targaryen alone in the world is a terrible thing,” the old man says. Jon takes Aemon’s mind off the troubles by asking for advice on giving a command that will alienate half the men. “Kill the boy and let the man be born,” the maester says. (He’s speaking metaphorically, which is important to note on this carnage-heavy show.) Jon meets with prisoner of war Tormund Giantsbane and issues a command: Go north of The Wall and collect the freefolk so they can fight alongside the Night’s Watch in the coming battle. “Your people need a leader, and they need to get south of The Wall before it’s too late,” he says. Tormund grudgingly agrees, but with one caveat: Jon has to go with him to plead his case in person.

Jon’s brothers are not. down. with. his. plan. “We can learn to live with the Wildlings or we can add them to the army of the dead,” Snow argues. “Whatever they are now, they’re better than that.” Perhaps maddest of all is his assistant Olly, whose parents were slaughtered by wildlings while he watched.

Stannis later finds Davos and announces they’ll march at dawn, and Melisandre, Shireen and Lady Selyse will accompany them — an idea Davos thinks is ill-advised. “I’m not scared,” Stannis’ kickass daughter tells her knight pal. “I am. When the battle comes, promise you’ll protect me?” he responds. Dear Game of Thrones: Please do not kill Shireen and/or Davos. Thanks!) Melisandre gives Jon Snow a pointed look, then Stannis’ men depart for Winterfell.

HOUSE LANNISTER | Tyrion and Jorah are still on the dinghy when Tyrion notices that they’re going to Meereen via the ruined city of Valyria, Dany’s ancestral home. And guess what they see there, taking wing over the ruins? A dragon. And guess what attacks them right after? Stone men. “Don’t let them touch you!” Jorah yells as Tyrion tries to protect himself, still bound. Remember how Gilly said those with greyscale started acting like animals? These guys are doing much the same — and when one knocks Tyrion overboard and starts dragging him down to the bottom, it looks like the youngest Lannister is done for.

Fortunately, Tyrion comes to on land as Jorah cuts him free. They both say that none of the men touched them, thus passing along the greyscale. “Thank you for saving me,” Lannister says grudgingly. But he doesn’t see Jorah turn away and roll up his sleeve, revealing a patch of scaly skin underneath. Looks like having no wine, Tyrion, soon will be the least of your problems.