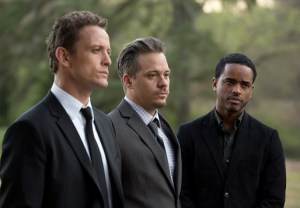 NBC ordered another pair of new dramas — Game of Silence and The Player — for the 2015-16 TV Season, as a busy, busy Friday drew to a close here in TV land.

GAME OF SILENCE
From Carol Mendelsohn (CSI) comes this w drama about a successful Atlanta attorney (David Lyons, Revolution) whose long-lost childhood friends unexpectedly reappear after 25 years. When a dark secret they thought they had buried resurfaces, the brotherhood bands together to right the wrongs of their shared past — a journey that will push the limits of their loyalty and quench their thirst for revenge.

THE PLAYER
From the producers of The Blacklist and starring Wesley Snipes and Strike Back‘s Philip Winchester, this action-packed Las Vegas thriller follows a former military operative-turned-security expert who is drawn into a high-stakes game where an organization of wealthy individuals gamble on his ability to stop some of the biggest crimes imaginable from playing out.