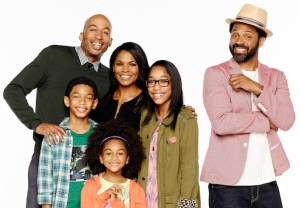 ABC has picked up a fourth “new” comedy for the 2015-16 TV season: a(nother) small-screen adaptation of the 1989 feature Uncle Buck.

Based on the hit John Candy-starrer, the sitcom stars Mike Epps as Uncle Buck, a fun-loving but irresponsible guy who needs a job and a place to stay. By happy coincidence, his nieces and nephew’s nanny has just quit, and his brother and sister-in-law (Las Vegas‘ James Lesure and Third Watch‘s Nia Long) need his help.

As TV luck would have it, Uncle Buck’s unconventional personality just may make him the right fit for the family — while they may be the answer to his problems, too.

CBS back in 1990 attempted an Uncle Buck series, fronted by Kevin Meaney, but it was very short-lived.

ABC previously gave series orders to the comedies The Muppets, Dr. Ken and The Real O’Neals.