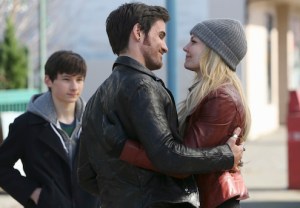 Just days before its Season 4 finale, Once Upon a Time has emerged as the first scripted ABC series to be officially renewed for the 2015-16 TV season.

Once co-creator Adam Horowitz revealed the news on Thursday night, via Twitter:

Season 5 of #OnceUponATime is officially a go! Thank you all for your support! Excited to bring you more!

ABC’s only other move thus far this spring on any of its current series was the cancellation of Revenge, which wraps its four-season run on Sunday at 10/9c. (A February How to Get Away With Murder promo said the freshman hit would be back for Season 2, which of course is a foregone conclusion, but ABC has yet to officially announce anything.)

Once Upon a Time‘s season finale, the two-part “Operation Mongoose,” airs Sunday at 8 pm.