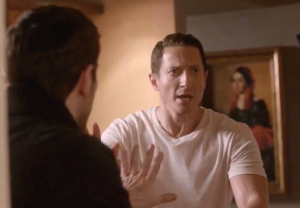 Note to Grimm: If someone’s going to slink around Capt. Renard’s house in the middle of the night, we’d prefer that it’s Adalind on the prowl and not some creepy, copycat killer.

Alas, that’s precisely the scene that Nick, Wu and Hank walk into in this exclusive clip from Friday’s episode (NBC, 8/7c).

PHOTOS May Sweeps/Finale Preview: 100+ Spoilers and Exclusive Photos From Your Favorite Shows, Including Grimm

Portland’s finest arrive at the captain’s quarters after a strange man answers Renard’s phone when Nick calls. The confusion only intensifies when Renard reveals he was asleep for the whole exchange (though we’re not sad about the shot of Sean in his jammies).

Considering all the weirdness that has surrounded the captain as of late, we’re thinking he’ll want to heed the advice Hank offers at the end of the preview.

Press PLAY on the video below for your first look at the episode.