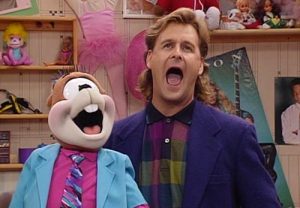 If you had any doubt about Uncle Joey being a part of Fuller House, go ahead and cut… it… out!
Original Full House cast member Dave Coulier announced Thursday that he will be part of the sitcom’s forthcoming Netflix continuation series.

In case you’re curious, Mark Cendrowski — the guy in the photo with Coulier — directed Mary-Kate and Ashley Olsen in four episodes of So Little Time, and he’s helmed 159 out of 183 episodes of The Big Bang Theory.

Since Full House wrapped in 1995, most of Coulier’s TV work has been in voicing characters on series like Robot Chicken and Bob & Doug.

Earlier Thursday, TVLine reported character details about the three children (DJ and Kimmy’s kids) who’ll be introduced in the revival.