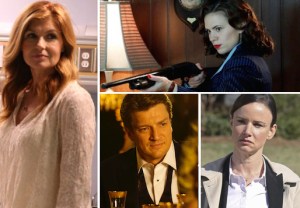 ABC handed out renewal notices late Thursday, formally ordering second seasons of rookie series Secrets and Lies, black-ish, Fresh Off the Boat, How to Get Away With Murder, American Crime, Galavant and Marvel’s Agent Carter, as well as established bubble dramas Nashville (for Season 4) and Castle (for Season 8).

On the reality front, ABC has picked up a 21st season of Dancing With the Stars, a 20th season of The Bachelor, a 26th season of America’s Funniest Home Videos, a seventh season of Shark Tank, and a second season of Beyond the Tank.

ABC, meanwhile, has cancelled Forever, Cristela, Resurrection, Revenge and The Taste. The fate of Last Man Standing remains up in the air.