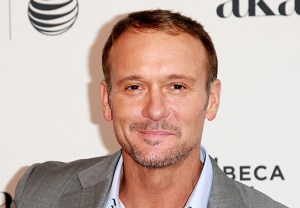 The singer/actor is set to star in and executive-produce Robbers, an upcoming drama project at TNT, our sister site Deadline reports.

Based on Christopher Cook’s 2000 novel, Robbers follows two ex-cons on a crime spree across Texas. McGraw will play Ray Bob, one of the drifters, who is described as the “worst of the worst.”

McGraw is a newcomer to TV, but his film credits include The Blind Side, Friday Night Lights, Country Strong and the upcoming George Clooney flick Tomorrowland.

* TNT has pushed the Season 2 premiere of Sean Bean’s Legends to the fall, at which time The Librarians will also return and Agent X will debut. In turn, the new period drama Public Morals will now premiere Tuesday, Aug. 25, at 10/9c (eight days later than originally announced).

* PlayStation has renewed its comic-book drama Powers for a second season, to debut in 2016, per The Hollywood Reporter.

* C. Thomas Howell (Southland) and Henry Rollins (Sons of Anarchy) will guest-star on Stitchers, ABC Family’s upcoming procedural drama about Kirsten, a young woman who helps a covert government agency solve murders by getting “stitched” into the minds of the deceased. Howell will recur as Daniel, a mysterious person from Kirsten’s past, and Rollins will play Barbiero, a security expert who is pushed to extreme measures.