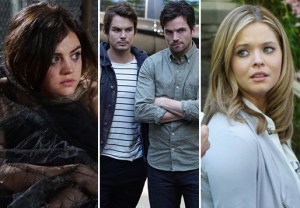 They may still be dressed to the nines, but the Pretty Little Liars look worse for wear in the first official batch of photos from the ABC Family drama’s Season 6 premiere (June 2, 8/7c).

Aria, Hanna, Emily, Spencer and Mona remain prisoners at Charles’ compound — which we first revealed in our exclusive premiere promo — and based on their expressions in these shots, they don’t appear hopeful about escaping anytime soon.

Meanwhile, these photos also give us our first look Alison in Season 6; the girls’ former puppet master is facing a media frenzy back in Rosewood, though I’m a little surprised to see her out and about at all. Wasn’t she found guilty of murder last season?

Ezra and Caleb look equally skeptical of Alison as they watch her field questions from the sea of reporters. What’s that girl up to this time?

Browse the new Season 6 photos below, then drop a comment: What do you hope to see when Pretty Little Liars returns?