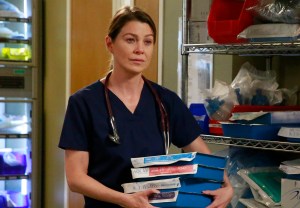 It’s time to hit pause on the time jumps and get all hands (including maybe a brand-new one?) on deck, as seen in these exclusive photos from Thursday’s Grey’s Anatomy (ABC, 8/7c).

In this season’s penultimate episode, “Time Stops,” Amelia unloads on Meredith, having kept pent up for nearly a year — due to her sis-in-law’s AWOL status — her true feelings about the handling of Derek’s critical, ultimately fatal car crash injuries.

The face-off might be short-lived, though, seeing as the doctors of Grey+Sloan will be forced to put their emotions aside and scramble when a catastrophic event occurs.

Also as glimpsed in the 12 news photos linked below, Giacomo Gianniotti (Reign) kicks off his multi-episode run.