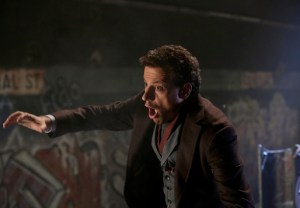 Forever creator Matt Miller has done his part. He’s made a formal proposal to the network. He’s rallied the fans on social media. And now he’s waiting — like the rest of us — to see if his procedural-with-a-supernatural-twist will make like its protagonist and prove unkillable (at least for another season).

“We went and pitched our Season 2, what that would be, to ABC,” he tells TVLine. “It went great, and they were really pleased. They’ve been very supportive of the creative of the show all season long. I think it’s going to come down to their pilots, and their schedule, and everything else.”

In the meantime, Forever wrapped its freshman season Tuesday by tidily putting an end to Adam’s tyranny at the same time it created myriad possibilities for the Jo-Henry relationship. The quickest of recaps: A confrontation in an abandoned subway station led to Adam being paralyzed and Henry dying/disappearing; though Jo didn’t see the moment of truth take place, she found Henry’s pocketwatch and a 1940s-era family photo of him at the scene — and then confronted him with the items at the end of the hour as Abe urged his father to spill his secret.

Read on as Miller breaks down the hour. Topics covered include: John Noble’s involvement in the episode, the scene you didn’t see and why Henry always comes back to life in the East River, of all places.

PHOTOS May Sweeps/Finale Preview: 100+ Spoilers and Exclusive Pics From Your Favorite Shows

TVLINE | So Adam’s theory was wrong: You actually can’t be killed by the weapon that initially killed you.
That’s correct, that’s correct, yes. We wanted to create this idea of a possible kind of MacGuffin that could end your life… Certainly, we didn’t want the show to turn into Highlander, which is that there is this kind of one knife, or one gun, or something like that that can end your life. For Henry, it’s an existential, ongoing, seasons-long question: Can he end his life, and if so, would he?

TVLINE | To be super clear, when Henry sticks Adam with a syringe at the end, it’s just full of air, correct?
Yeah. Excellent! Very good. Yeah, an air embolism in his brain, in the brain stem, that puts him in this kind of coma, for lack of a better word. It was medically researched. I’m not sure that that’s how you would actually do it, but an air embolism in the brain would produce that sort of side effect. We wanted Adam to be catatonic, but also be slightly aware that Henry was there… It felt like putting him in some kind of a medically induced coma was Henry’s best version of revenge.

TVLINE | Would you have a new big bad come in for Season 2? Would the show maybe not be as mythology-based as it has been this season? What are your plans?
There will certainly be mythology brought into Season 2. How Adam will be utilized is not completely worked out yet, but we certainly feel like there’s more story to tell with Adam. We also want to introduce new characters that add some fresh blood to this world and be able to work in the idea, not only of the mythology, but in the romance of the series and other stories that we want to pursue.

TVLINE | At the very end of the episode, Abe pointedly instructs Henry to tell Jo what’s going on, and then the episode ends. What can you tell me about what might follow?
Obviously, we ended with a little bit of a cliffhanger, in terms of Henry and Jo, and it’s something that we’re interested in pursuing in Season 2. Who will find out Henry’s secret? Will other characters find out? What does that mean for the show? It’s hard to say without giving away any real spoilers about it, but suffice to say, it is something that we have thought about and have a plan.

RELATED May Finales Calendar: Find Out What’s Ending When!

TVLINE | Did you have John Noble in mind for this episode when the character of Aubrey Griffin was conceived?
No. I mean, he seems so perfect, right? …Our casting director, Suzanne Ryan, had this idea about John Noble. I’m a huge fan. Obviously, for this kind of a role, he’s on a very, very short list of people that you would just love to have do it. As luck would have it, he was doing a play in New York [where Forever shoots]… Yeah, it was just a perfect piece of charmed casting that worked out for our schedule.

TVLINE | Flashbacks in this episode show Abigail learning Henry’s secret. Why include that now, an episode after we’ve learned she died?
The Abigail-Henry story, we felt like we told a lot of that mythology in Season 1, and then Henry finally gets the closure in present day. But audience always was kind of curious: How did Abigail learn, and when? That’s something that we get to tell and explore in that final episode… She says to him, “You poor man,” and in that moment, she immediately understands everything that Henry has felt and been unable to articulate to somebody, which is she gets that he has this sort of strange, supernatural mysticism about him, but that she also understands, God, what a lonely life that would be, and how difficult of a life.

She understands the complexity of his situation immediately, and that’s why she was the great love of his life for that part of time. 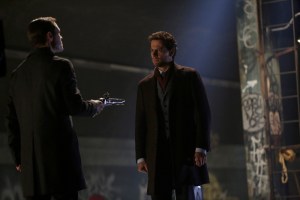 TVLINE | Both the series premiere and season finale had significant scenes taking place in and around the subway. I assume that was an intentional callback?
Right… There was also, you should know, a really big scene that we cut out of this episode, between Henry and Adam in the very beginning of the episode on a subway, and it was supposed to be very, very much reminiscent of the pilot.

We had a whole aconite poisoning, which was how the subway conductor was initially poisoned in the pilot, and there was the subway crash. In this one, Henry was able to prevent it from happening. It was a big action scene. We shot it, and like it happens in post sometimes, it took the story in an unusual direction… Once Adam and Henry had a confrontation in Act 1, it set the tone of the episode off in a wrong way, and we wanted to put off them meeting each other until that moment towards the end of Act 2 where Henry realizes that Adam had sliced up that guy in that moment where he comes in.

TVLINE | Last question: As a New Yorker, I’ve always wondered why Henry always comes back to life in the East River, as opposed to the Hudson River.
If you want to know the truth, in the pilot, I wrote it for the Hudson… Our director, Brad Anderson, who actually also directed the finale… He was, like, ‘Yeah, the view’s a lot prettier in the East River, or in Brooklyn, looking out over Manhattan than it is in Manhattan looking out onto the Jersey shoreline.’ I was like, “That’s cool.”… I’m all for the sort of prettiest version of the show. [Laughs] That was the thought process in why it’s the East River and not the Hudson.