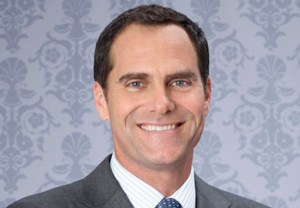 You’re the Worst‘s Jimmy is about to receive a reality check delivered by the man who spent years reeling in Dunder Mifflin’s Michael Scott.

Office alum Andy Buckley will guest-star as the British author’s agent in Season 2 of the FX-to-FXX comedy, per The Hollywood Reporter.

As of now, Buckley will appear as Russell Fleischer in one episode, in which he’ll break it to his entitled client that loose cannon authors like himself can’t expect offers for high-level gigs.

Since The Office wrapped in 2013, Buckley’s TV work has included gigs on Arrested Development, The Bridge, Battle Creek and Scorpion. He also appears in Bravo’s upcoming scripted comedy Odd Mom Out.