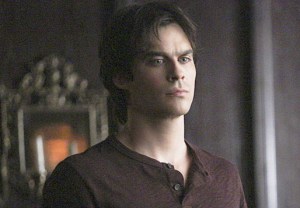 Why so glum, chums?

The CW on Monday released a batch of photos from The Vampire Diaries‘ season finale (May 14, 8/7c), and while it’s nice to see the gang all together, it’d be even nicer to see some smiles!

Oh wait, there’s someone missing from this gathering… and Damon appears to be delivering some less-than-stellar news. Could something terrible have befallen his beloved?

I can’t say I’m surprised. According to the show’s log line, an “uninvited guest” at Jo and Alaric’s wedding leaves Elena in “terrible jeopardy.” Couple that with the fact that Damon is “forced to make the most difficult decision of his life,” and you’ve pretty much got a recipe for Delena disappointment.

TVD fans, how do you think Elena will choose to depart Mystic Falls? Browse the season finale photos below, then drop a comment with your best theory.