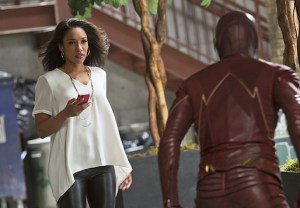 Our long national nightmare is over: Iris West knows the truth about The Flash‘s identity. And dare we say, Candice Patton is even more excited than her Flash-crushing alter ego to join the club of those “in the know.”

As the CW hit (Tuesdays, 8/7c) speeds toward its freshman finish line, Patton paused to speak with TVLine about proving haters wrong, Iris’ sense of hurt, her feelings for Barry versus Eddie and a finale that is perhaps not what you think it is.

TVLINE | What was your reaction when you saw the script where Iris learns the truth — and that it was going to stick?
I was so relieved. I was relieved for me, and for all of the fans who’ve been waiting so long for Iris to find out. I was relieved for all the haters [Laughs] who just thought Iris was stupid and would never find out. I was extremely excited to film this episode, and then for it to air.

TVLINE | It’s got to be hard to play The Last One to Find Out — did you get any tips from Arrow’s Katie Cassidy?
No, but I probably should have! Because I don’t think I was aware of how difficult it would be to play that kind of character. I just assumed that it’s a part of comic book series — you always have that Lois Lane/Iris West/Laurel Lance character — so it’s necessary, right? And other shows have dragged it out for much, much longer. We were almost afraid that we were going to be revealing it a little too soon. So to see people upset that Iris didn’t know right away, it was a bit frustrating. It was hard to be the last one to know.

TVLINE | What in the world is going through Iris’ head right now, standing there on that walkway?
I think she’s shocked. Hurt. Angry. And now she’s putting everything together, all of those meetings she has had with The Flash on rooftops, at Jitters, and realizing that those conversations were with Barry. Her whole world is kind of upside-down.

TVLINE | Will things slow down enough, so to speak, anytime soon for her and Barry to talk about this?
Yeah, [this week] especially you will see that Iris is actively going to confront Barry about being The Flash and keeping that secret from her — and subsequently, having that same conversation with Joe. These are two men in her life who were supposed to be honest with her. This is the only family that she really has, the people you’re supposed to trust the most, so for them to have been in cahoots…. She’s going to feel very, very angry and betrayed.

TVLINE | As she processes 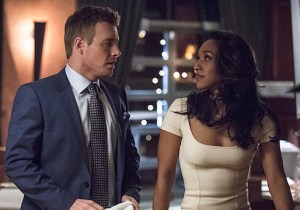 this information, will she ultimately be prompted to reconsider her feelings for Barry versus Eddie?
There’s a lot that she’s having to think about — not just her feelings for Barry and for The Flash, but the fact that Eddie is missing and that she loves him. She’s going to continue to be conflicted about her feelings for both men. I mean, we havent seen anything from Eddie except that he’s a good man and he loves Iris and he treats her well, so she’s really in a difficult place. But at the same time, it’s evident to everyone who watches the show that Iris has feelings for Barry that she’s just not ready to deal with.

TVLINE | Meanwhile…. Grodd is on the loose this week!
Yeah! Cisco and Barry and Joe kind of go out to track down Grodd. We know that he’s a danger, so those guys go down in the sewers to track him down, and you’ll see Iris kind of join the team and help in her own way, using her skill set to do what she can for the S.T.A.R. Labs crew.

TVLINE | What is her skill set as applies here? What can she bring to the table?
She’s a reporter, so she knows what’s been going on. She knows more about the word on the streets than maybe Caitlin and Cisco, who are more [about] tech. Iris is a little more “in the know” 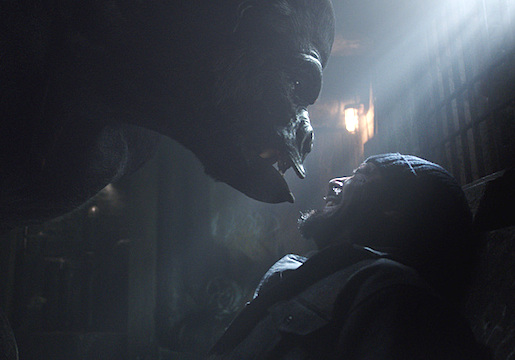 about what stories have been written about the sewer system, people who have seen Grodd and where they’ve seen him….

TVLINE | Did you get a chance to act opposite any tennis balls-on-strings?
Oh, no. No. I’m waiting for my day with Grodd. Grodd is actually my favorite character on The Flash, so I am just waiting for my moment!