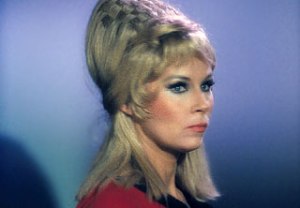 Grace Lee Whitney, best known as Yeoman Janice Rand in the original Star Trek series, died on May 1 at her home in Coarsegold, Calif. She was 85.

Whitney was fired at the end of Star Trek‘s first season, but she went on to reprise her role as Janice in Star Trek: The Motion Picture, Star Trek III: The Search for Spock, Star Trek IV: The Voyage Home, and Star Trek VI: The Undiscovered Country. She also guest-starred in a 1996 episode of Star Trek: Voyager that commemorated the 30th anniversary of the franchise.

In her autobiography The Longest Trek, Whitney opened up about her struggle with alcoholism, as well as her departure from Star Trek in 1966. “They wanted William Shatner to have romances in each episode with a different person, because for him to be stuck with one woman was not good for him and it wasn’t good for the audience,” she wrote. “That’s what they told me, so I was written out.”

Whitney spent her later years “helping herself and others find daily sobriety and a higher power out of addiction,” her son, Jonathan Dweck, told The Fresno Bee.