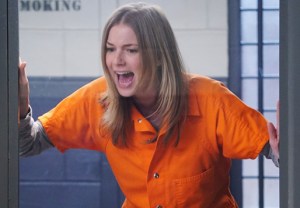 We don’t mean to alarm you, but some extremely hectic — and potentially life-threatening — stuff is going down on the penultimate episode of Revenge.

Just-released photos from Sunday’s episode (ABC, 10/9c) find a desperate Amanda being visited in prison by two familiar faces, Ben (boo!) and David (yay!), but wait… why is David collapsing on the floor, clutching his heart? 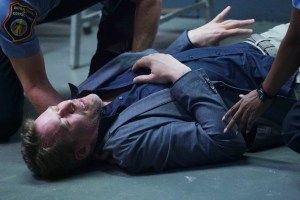 Fortunately, thanks to our exclusive first-look photo from next Sunday’s series finale, we know that David lives to see another day — but that doesn’t mean he’s out of the woods just yet. Frankly, we wouldn’t be surprised if it was lights out for Papa Clarke before the series draws to a close; isn’t it kind of a miracle he’s survived this long?

Earlier this week, it was confirmed by showrunner Sunil Nayar that Revenge‘s season finale will, indeed, serve as the series’ last episode, so it’s anyone’s guess what might come out of these last two hours.

Browse the new photos below, then drop a comment: How do you hope it all ends?