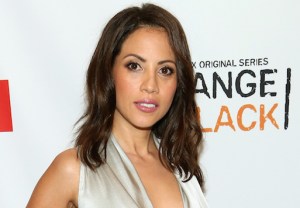 What’s scarier: prison politics or the zombie apocalypse? Orange Is the New Black‘s Elizabeth Rodriguez is about to find out.

Details about Rodriguez’s character reportedly are being kept under tight wraps. What we do know: The companion series stars Cliff Curtis (Gang Related), Kim Dickens (Deadwood), Frank Dillane and Alycia Debnam Carey (The 100) as Los Angeles residents in the early days of the walker takeover.

In addition to playing Daya’s mom, Aleida, on the Netflix prison drama, Rodriguez also has appeared on Grimm, Power, All My Children, ER and New York Undercover, among other series.

Fear the Walking Dead is slated to debut this summer. The timing of Rodriguez’s casting seems to indicate that she will not appear in the pilot, which already has been shot.