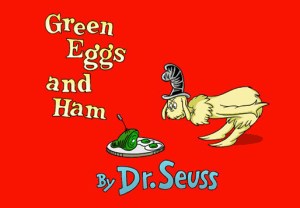 Don’t you worry, Sam-I-Am: Netflix does like Green Eggs and Ham.

The streaming giant announced Wednesday that it has ordered 13 episodes of an animated series based on Dr. Seuss’ classic children’s book.

First published in 1960, Green Eggs and Ham follows an unnamed protagonist who, with the help of perpetually optimistic Sam-I-Am, is forced to try the titular meal. (Spoiler alert: He loves it.) A voice cast for the project has not yet been announced.

Production will begin in May, with a premiere slated for 2018. Below, watch DeGeneres announce the project to her studio audience at Ellen, then hit the comments with your thoughts.