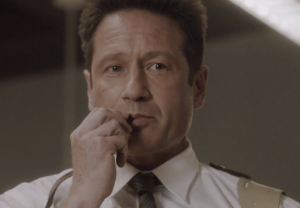 NBC is taking a “if you can’t beat ’em, join ’em” approach with its new drama Aquarius.

In an unprecedented move for a broadcaster, the Peacock network has announced that it will release all 13 episodes of David Duchovny’s Charles Manson-themed thriller on NBC.com and other on-demand platforms immediately after the show’s two-hour NBC premiere on Thursday, May 28.

“With Aquarius we have the opportunity to push some new boundaries to give our audience something no broadcast network has done before,” said NBC Chairman Bob Greenblatt in a statement. “We are fully aware how audiences want to consume multiple episodes of new television series faster and at their own discretion, and we’re excited to offer our viewers this same experience since all 13 episodes of this unique show have been produced and are ready to be seen.”

In the 1960s-set series, Duchovny plays a Los Angeles police sergeant with a complicated home life who takes note of small-time criminal Manson when he begins recruiting needy women to what becomes his cult. As history records, these members of Manson’s “family” eventually commit various ghastly crimes, including the murders of actress Sharon Tate and supermarket owner Leno LaBianca.