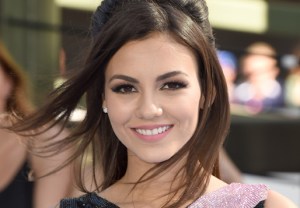 One week after tweeting the news that her MTV drama Eye Candy won’t be returning for a second season, Justice took to social media to share that she’ll guest-star on the upcoming live episode of NBC’s Undateable.

The news came complete with a selfie of Justice and her script:

Guess who's guest starring on next weeks @nbcundateable? It's meeeee 😬 & it's going to be LIVE🙀. Tuesday… Brace yourself. #May5 Also, to all you smarty pants who already guessed it… How did you know?! And yes. I just said smarty pants. #undateable

This guest spot actually marks Justice’s return to her comedy roots; she starred on the Nickelodeon sitcom Victorious from 2010 to 2013.

Justice’s episode of Undateable airs May 5 on NBC.