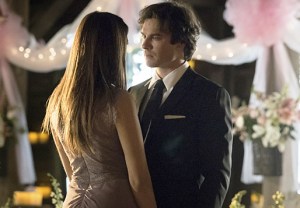 Over the years, we’ve seen Elena and her supernatural pals get all gussied up for many an occasion — those epic decade dances spring to mind — but based on these photos from Jo and Alaric’s May 7 wedding (The CW, 8/7c), I’d say The Vampire Diaries costume department has finally outdone itself.

TVLine gave you an exclusive first look at the bride and groom in their wedding attire, but now The CW has released shots of Damon, Stefan and Elena in their formal duds… and they look even better than you’d imagine.

But not everybody’s dressed for the occasion; Bonnie appears to be sitting this one out, while Caroline — well, we only see her from behind, so it’s too soon to predict whether or not she’ll bear witness to #Jolaric becoming official. But at least her potential date is sporting some serious hero hair. (Update: Thanks to Nina Dobrev, it appears we can confirm that Caroline will be in attendance!)

Browse the just-released wedding photos below, then drop a comment: What do you hope to see on Jo and Alaric’s big day?