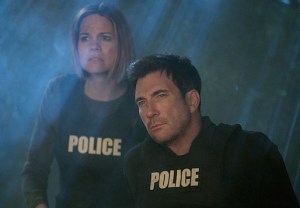 Returning from its nine-week hiatus to a new night and time, CBS’ Stalker drew 5.7 million total viewers and a 1.3 rating (per finals), down 15 percent in audience but up a tenth in the demo versus its most recent outing (closing a Wednesday in February). Versus Scorpion‘s week-ago finale, however, Stalker was down a steep 44 and 36 percent.

Fox’s The Following meanwhile did 3.5 mil and a 1.2, adding a few eyeballs week-to-week while steady in the demo.

FOX | The penultimate Gotham (4.6 mil/1.5) added some eyeballs but ticked down in the demo, matching its series low.