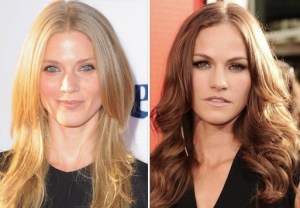 Martin Odum will get by with a little help from some new friends when TNT’s Legends returns for Season 2.

The spy thriller has cast Sons of Anarchy vet Winter Ave Zoli as Detective Gabriella Laska, a highly-driven career woman who manages to conceal her Type-A nature behind a free-spirited persona. True Blood‘s Kelly Overton will join her as Nina Brenner, a tough-as-nails CIA officer with no trouble holding her own in the male-dominated spy game.

The Sean Bean starrer also has tapped The Fall‘s Aisling Franciosi to play the opinionated Kate Crawford, a dashing British teen of Chechen descent who has a troubled home life. Meanwhile, Steve Kazaee (Shameless) will portray the troubled Curtis Ballard, a straitlaced FBI agent haunted by a violent youth and the one criminal he could never catch.

The cabler’s sophomore run is expected to debut later this year.