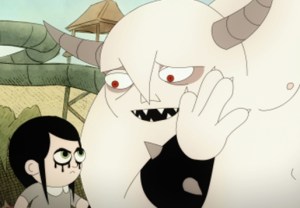 Fox just can’t get enough of Golan the Insatiable.

The animated comedy — which originally aired in 15-minute installments on Saturday’s Animation Domination High-Def lineup — has been given a primetime series order, TVLine has learned.

A new voice cast has been recruited for the series, including Rob Riggle (NTSF:SD:SUV) as the titular godlord who is transported from an alternate dimension to Oak Grove, Minn. There, his only friend is Dylan (Parks and Recreation‘s Aubrey Plaza), a macabre 9-year-old girl who constantly urges Golan to wreak havoc on her town.

Golan the Insatiable is the first Animation Domination High-Def project to score a primetime series order. Its first half-hour installment will premiere on Sunday, May 31, at 9:30/8:30c.