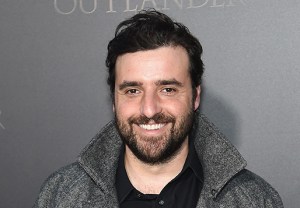 Here’s a number David Krumholtz will have to get used to: 76.

That’s the age of the titular grandmother — yes, grandmother — that Krumholtz will play in Gigi’s Bucket List, a half-hour comedy ordered to series at IFC on Tuesday.

The Numbers vet will star as Gertrude “Gigi” Rotblum, who discovers an unknown bank account in the will of her late husband. With her new fortune in tow, Gigi sets out to experience everything she had deprived herself of in younger years.

“This character has been living inside me since birth; friends have often accused me of acting like a grandma,” Krumholtz said in a statement. “It’s an absolute privilege to be bringing Gigi to life for IFC, known for their irreverent brand of comedy and willingness to explore depth of character.”

Production on Gigi’s eight episodes will begin in Los Angeles this June.

* Sofia Pernas (NCIS) will recur on The Young and the Restless as Marisa, a mysterious beauty who arrives in Genoa City to interact with key characters, Soap Opera Digest reports.

* USA Network has picked up the drama pilot Paradise Pictures, produced by Aaron Korsh (Suits) and Universal Cable Productions. Set in the 1940s, the potential series follows a group of ambitious people striving to get to the top in Hollywood, unaware of the many challenges they are about to face.

* Arrow alum Byron Mann has joined Hell On Wheels‘ fifth and final season in a series regular role, Deadline reports. He will play Chang, a powerful Chinese businessman and labor contractor fighting for power in the Central Pacific Railroad construction.

* VH1 has renewed its docu-comedy series Barely Famous, starring sisters Erin and Sara Foster, for a second season, per The Hollywood Reporter.

* Disney Junior, meanwhile, has ordered a second season of its intergalactic animated series Miles From Tomorrowland.