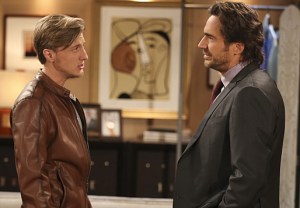 The Bold and the Beautiful‘s recently-revealed-as-transgender character had help making the transition from Myron to Maya; pretty soon, we’ll meet the man who was there to show her the way.

Transgender actor Scott Turner Schofield will make his TV debut as Maya’s bestie, Nick, in the May 8 episode of the CBS soap, TVLine has confirmed.

Schofield, who speaks and writes about diversity, became acquainted with the show when it asked for his recommendations of transgender actors to flesh out its headline-making storyline starring Karla Mosley. Though he was surprised when he received an invitation to audition, the New York Daily News reports, he nabbed the part.

Nick and Maya know each other from “when she first landed in Los Angeles before she became the huge success that she is,” Schofield tells the Daily News, adding that Nick will “remind her that she is beautiful and whole and authentic exactly as she is.”

The actor, who has taped six episodes so far, explains that he’ll be around when “things start to happen and discrimination mounts, so [Maya] can stand strong in who she is and how she made the right choices for herself.”