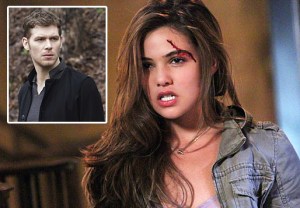 If you’re holding your breath for a Klaus-Davina reconciliation on The Originals, allow me to mourn you now.

“She is enraged,” Danielle Campbell says of her character following the death of Aiden, whom she (and everyone else) believes was killed by Klaus. “The most important thing to Davina is taking care of the few people she really trusts; Aiden became one of those people while he was with Josh, and she can’t understand how Klaus has managed to kill yet another person [that she loves]. … She’s ready for Klaus to be dead and out of her life.”

As for poor Josh, Campbell says that Davina will try to help him through his grief on Monday’s episode (The CW, 8/7c), “but at the end of the day, he’s not ready to face the fact that Aiden is gone. He’s going to deal with loss in his own way. And that’s what makes the show a little more human — normal people don’t just kill everyone you love and have it be fine.” 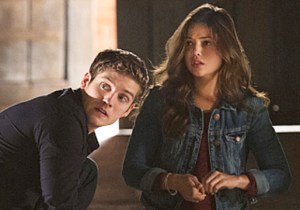 Of course, there’s another boy weighing heavily on Davina’s mind; she’s still in the process of resurrecting Kol, and according to Campbell, she’s about to make a major breakthrough.

“Vincent presents her with an opportunity that could bring her closer to bringing back Kol,” she reveals, “and it’ll also put her in a [higher position] of power.”

Speaking of power, Campbell notes that Davina has been “experimenting a lot with dark magic” which will “come into play next season.” In the meantime, she’s just excited for fans to see the final three episodes, which culminates in a “really big finale. It closes a lot of doors that have been left open, and the third season will basically feel like a new show. We’re introducing a new storyline and it’s going to be very exciting.”

Originals fans, how do you hope this insane season turns out? Drop a comment with your wish list below.