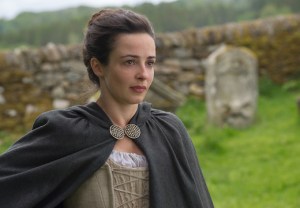 Outlander‘s feisty Claire Fraser certainly didn’t enjoy her new sister-in-law calling her “trollop” within minutes of meeting her, so it’s a good thing that her portrayer, Caitriona Balfe, is a much more understanding sort.

The actress cuts Jenny Murray — the very pregnant sibling of Claire’s husband, Jamie — a skein of slack when it comes to manners… and word choice… and basic human courtesy.

“When Claire and Jenny first meet, there’s a lot of tension coming from Jenny’s camp,” Balfe says, reflecting on the events of this past Saturday’s episode. “It’s funny. These two women both feel that they have an ownership of Jamie.”

Sam Heughan, who plays the man in question, tells TVLine his long history with Laura Donnelly — they attended the Royal Conservatoire of Scotland together “and we were working together in Norway on a film when I got cast in Outlander” — gives Jamie and Jenny’s relationship its feeling of flinty familiarity.

“We just wanted to make sure that they are similar in their stubbornness and in their blockheadedness, and she’s such a great actress that she gives as good as she gets,” he says. “Those scenes where they really go at it, it’s really important.”

Plus, Balfe adds, it’s not as if Jenny’s irritation is without cause. Claire and Jamie’s abrupt and unannounced arrival at his family’s home “changes a lot” for his older sister, who’s been running the place in his absence. “It’s hard for her to accept that. Plus,” Balfe says, laughing, “she’s nine months pregnant, so anyone would probably be a little grumpy.”

And if you thought things at Lallybroch were tense now, just wait until Jenny goes into labor in this week’s episode (Starz, Saturday at 9/8c). In a diversion from Diana Gabaldon’s book, Claire alone — without the aid of an experienced midwife — helps her sister-in-law through the life-altering process.

“I did a lot of research and I watched a lot of videos, which were kind of harrowing, of home births,” Balfe says, chuckling; after all, though Claire’s a skilled nurse, “She’s a combat medic. Not too many soldiers in the second World War were giving birth, so her experience is quite limited.”

Though the interlude doesn’t make instant besties of Jamie’s soulmate and his sister, “It’s great to see how these two women come together,” Balfe adds. “They forge this really close bond.”