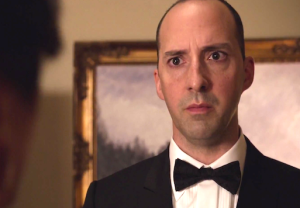 THE PERFORMANCE | In his four seasons as Selina Meyers’ body man, Veep‘s Gary has raised nearly no complaint about the unrelenting abuse from his beloved bully of a boss. The relationship should be a total bummer, but thanks to Hale’s subtle touches — a grimace here, a smile of unbridled admiration there — we’ve come to love Gary for the stumbling sycophant he is. And we thought we knew everything about him, until Hale let the bag man’s real feelings fly free on Sunday.

The break came as Gary was being harangued for creating not one but two public-relations nightmares for the newly elected president. Hale’s character quietly seethed, years of retorts and rebuttals rising to the surface as Selina insulted the decisions he’d made with only her happiness in mind. When the prez announced, “You are unimportant, OK?,” Hale was on. “You’re wrong,” he said quietly, quickly building to a litany of all of the tiny ways he makes her life better. “I’m your calendar. I’m your Google. I’m your Wilson the volleyball,” Hale said, voice raised, infusing Gary’s rant with a undercurrent of hurt feelings and a touch of hysteria. The best moment came right after Gary yelled the cryptic, “Can you find somebody else who did what I did?!,” a reference to an incident that (for right now) only President Meyers and her right-hand man know about.  A wide-eyed Hale seemed to deflate as Gary realized just how far he’d gone; you could feel the relief roll off the bag man when he was allowed to slip back into his normal routine with Selina moments later.

Phenomenal job, Hale. (Now, if you could just tell us what the heck happened on Labor Day?)

HONORABLE MENTION | In the immediate aftermath of Derek’s tragic death on Grey’s Anatomy, Ellen Pompeo hung a thick cloak of bitterness and rage over Meredith’s grief. (It’s a wonder she didn’t put the doctors who’d failed her husband in the ICU, so withering was the way that she spoke to them. Seriously — has “You did the best you could” ever sounded more damning?) As a result, when her monumental sorrow eventually showed through — as she was being presented with papers to terminate Derek’s life support — it wasn’t just heartbreaking to behold, it was crippling. “You go,” she finally whispered to Derek, a tear rolling down her cheek (right on cue, we might add). “We’ll be fine.” And, thanks to the strength of Pompeo’s performance, we believed her. Mer would be okay. Someday. But after this, neither she, nor we, would be the same.

HONORABLE MENTION | Michael Rapaport is of course no stranger to playing loud, in-your-face types – as he in fact did on this week’s black-ish. But with his guest-starring turn a night later on FX’s Louie, he seized on a pathos that was missing from, say, his year-ago Justified run. As Lenny, a cop who used to date one of Louie’s sisters, Rapaport veritably invaded our space as well as Louie’s, his character desperate to elicit a connection yet knowing full well why he never does. But it was in a closing sequence — when Lenny, in the course of confessing suicidal thoughts, realized he had lost his police-issue gun on the streets of New York — that Rapaport explored the depths of the big galoot’s despair. Curling into a ball on the floor of Louie’s living room, he revealed every chink in blowhard Lenny’s armor.

HONORABLE MENTION | It’s not every day – or, like, ever — that Oliver Queen breaks down and opens up. So we can only imagine what an exciting challenge this week’s Arrow posed for Stephen Amell, and the actor more than met it. In an episode with many emotional moments, it’s no surprise that Oliver’s uncharacteristically quiet, soul-baring confession to Felicity on the jet was Amell’s favorite of the season. In revealing the painful memory of killing Thea’s drug dealer and declaring himself a failure as a brother, the actor somehow managed to make the hulking, powerful hero seem small and lost. And let’s not forget that look of heartbreak as Felicity walked away after the pair desperately tried not to say goodbye to each other. (Where’s a comforting blanket when you need one?)