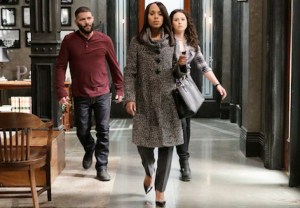 Olivia’s been Gladiating with a veritable skeleton crew on Scandal this season, but reinforcements are coming.

TVLine has learned that Liv in the near-ish future will finally get down to the business of filling one of the two vacant positions left by the dearly departed Harrison and now-White House press secretary Abby. And in a twist, I hear the new hire will be a familiar face to Scandal watchers — i.e. it’s a character Liv has previously crossed paths with (a guest star not a series regular).

Who’s the familiar face that’s about to get the coveted gig? That’s for me to know and you to speculate about in the comments.