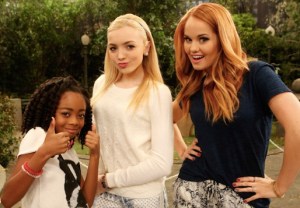 One of the year’s hugest TV mysteries — within the walls of my home, I should probably note — has been solved. In that we now know what Disney Channel’s Jessie spinoff will be about.

After all, the offshoot will not involve Debby Ryan, nor will Cameron Boyce (who plays Luke and will front Disney XD’s new comedy Gamer’s Guide to Pretty Much Everything) or Kevin Chamberlin (Bertram) be along for the ride. So how, how, how do you focus a series on Emma (Peyton List), Ravi (Karan Brar) and Zuri (Skai Jackson) without any parental or nanny-ental guidance and also explain Luke’s absence?

By sending the New York City penthouse-raised kiddies to a rustic summer camp in Maine, that’s how, and thus title the show BUNK’D.

As also reported by our sister site Deadline, the spinoff has added to its cast Miranda May (Liv and Maddie), Nina Lu and Kevin Quinn. Production on BUNK’D starts later this month with an eye on a summer debut.

As previously reported, Disney Channel’s Jessie is concluding its run at the end of Season 4 and 101 episodes.