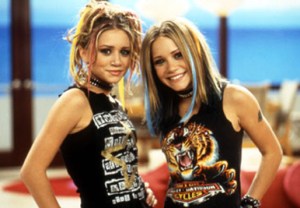 Have we collectively time-traveled back to the ’90s? Because the Olsen twins are suddenly everywhere.

On the heels of Netflix’s Full House revival becoming a reality, Nickelodeon announced Thursday that it has acquired Mary-Kate and Ashley Olsen’s library of series, TV movies and music video specials.

Among the titles acquired are The Adventures of Mary-Kate & Ashley, You’re Invited to Mary-Kate & Ashley’s, So Little Time, Mary-Kate and Ashley In Action!, Fashion Forward, Our Lips Are Sealed, Winning London, Holiday in the Sun, When in Rome, Getting There: Sweet 16 and Licensed to Drive and The Challenge. [Editor’s note: None of these are products of our imagination — we promise!]

So Little Time — the Olsen twins’ 2001 sitcom — will be the first title to air, debuting on Nickelodeon April 27 at 7:30 pm. Episodes will air every weekday, before the rest of the catalog is rolled out throughout the year.

* Arrow will be getting a helping hand next season: Wendy Mericle — who currently serves as co-EP and has been with the CW series since Season 1 — will join Marc Guggenheim as co-showrunner for Season 4.

* Lost alumna Maggie Grace will guest-star on a Season 3 episode of Masters of Sex. Per The Hollywood Reporter, she will play Christine Wesh, a well-respected gynecologist who helps Masters and Johnson on a case with international implications.

* Beginning at midnight on Friday, Fox will offer the series premiere of Wayward Pines in more than 126 countries, ahead of its May 14 debut. The global preview will make Wayward Pines‘ first episode available for one week (for free!) on Fox.com, Fox On Demand, Fox Now, Fox Play, Hulu and Facebook.

* This year’s ESPYs awards show is moving from ESPN to ABC, to air live on Wednesday, July 15 at 8/7c.