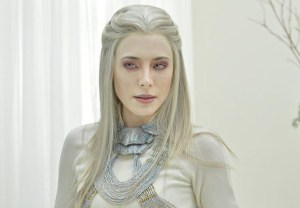 Syfy is giving you fair warning: This summer will bring about an alien siege, an angelic war and even more sharks falling from the heavens.

The cable network has released its summer premiere dates
, which include the return of fan favorites like Defiance and Dominion and the third Sharknado movie.

Defiance‘s third season will bow with a two-hour opener on Friday, June 12, at 8/7c, followed by the new amnesiacs-on-a-broken-down-spaceship drama Dark Matter at 10 pm. The next week, following a regular episode of Defiance, the galactic bounty-hunter drama Killjoys joins the lineup at 9 pm.

The post-apocalyptic angels of Dominion take flight for a second season on Thursday, July 9, at 10 pm; the reality competition Face Off is back for its ninth season on Tuesday, July 28, at 9 pm. Geeks Who Drink, a new game show hosted by Zachary Levi (Chuck) premieres on Thursday, July 16, at 11:30 pm.

Finally, the network will lead up to the debut of Sharknado 3: Oh Hell No! — which takes place Wednesday, July 22, at 9 pm — with several days of similar programming (including the premiere of Lavalantula) beginning on Saturday, July 18.

As of now, there is no news about when the second half of Haven‘s fifth season or Continuum‘s shortened final season will air on the cabler.