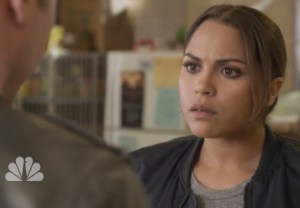 On next Tuesday’s Chicago Fire (NBC, 10/9c), an apartment fire linked to a rape case/attempted murder will require not one, but two Dawsons to get the job done.

“Antonio comes to the firehouse and asks me and Severide to investigate the arson,” star Monica Raymund tells TVLine, adding that she’s “really excited that Gabby and Antonio have been explored more and more this season.

“There was a huge crossover about Shay’s murder and that was really about Antonio and Gabby, and I like that,” she continues. “The audience responded to that. So it wouldn’t surprise me if we see more of that going forward.”

Press PLAY to watch the sneak peek, then hit the comments with your thoughts on the sibling team-up.