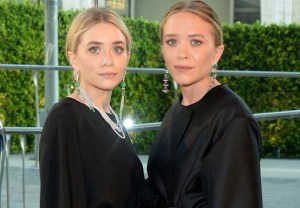 Don’t have a cow… Despite reports to the contrary, Mary-Kate and Ashley Olsen haven’t ruled out an appearance on Netflix’s Fuller House.

The Artists Formerly Known as Michelle Tanner reportedly found out about the Full House revival on April 21, a day after their former co-star John Stamos spilled the beans on Jimmy Kimmel Live.

The Olsens aren’t the only Full House alumni with questions. During an appearance on Tuesday’s Access Hollywood Live, the Olsens’ sitcom aunt Lori Loughlin said she and some other original cast members had not been part of early discussions about the series.

“They made deals with half the cast, but not with the other half,” she said. “I don’t have a deal, Dave [Coulier] doesn’t have a deal, Bob [Saget]… We’re all in negotiations. I think we would all like to come back, if the powers that be are fair to all of us.”

Scott Weinger (who played DJ’s boyfriend Steve) tweeted Tuesday about a possible return as well, assuring fans that his character may turn up in Fuller House.

I'm touched by everybody's concern for Steve's welfare. All I can say is, things are in the works for your favorite over-eater! #FullHouse

Candace Cameron Bure, Jodie Sweetin and Andrea Barber are the only original stars attached as Fuller House series regulars at this time, with Stamos signed on as a producer and occasional guest star.

Full House fans: Would you visit a Fuller House without Michelle, Danny, Joey, Becky or Steve? Sound off in the comments section!