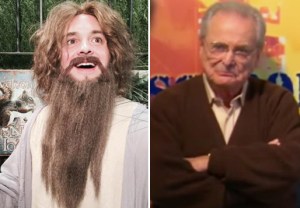 Girl Meets World viewers won’t have to wait long for the second coming of Boy Meets World‘s Eric and Mr. Feeny. In fact, the two fan-favorites will be back in less than a month!

According to a new schedule released Wednesday, Disney Channel is kicking off Girl‘s second season with a week’s worth of new episodes, one each night.

Feeny, who last appeared at the tail end of the pilot — not as a ghost, as many viewers initially thought — will return in the Season 2 premiere, “Girl Meets Gravity,” on Monday, May 11 (8:30/7:30c). He’ll also show up in “Girl Meets Pluto” on Thursday, May 14 (8:30 pm) alongside Rider Strong as Shawn. “Pluto” also features the original characters’ return to their Philadelphia roots, as they dig up an old time capsule from their childhood.

And because the best is often saved for last, Eric will make his first Girl appearance on Friday, May 15 (8:30 pm) during “Girl Meets Mr. Squirrels.” In a nutshell — get it?! — Cory’s older brother is enlisted to mediate a nasty feud between Riley and Maya.

Girl Meets World fans, are you stoked for Feeny’s return and Eric’s arrival? Drop a comment with your hopes for Season 2 below.