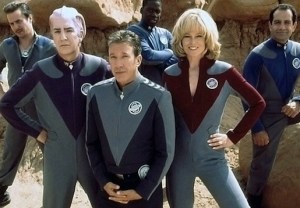 A sign that the reboot craze may be spiraling a bit out of hand: Even the Thermians of Galaxy Quest are getting a revival of their favorite show.

Per our sister site Deadline, Paramount Television is working on a television series based on the 1999 film… which is itself a parody of a Star Trek-like space show.

The movie starred Tim Allen, Sigourney Weaver, Alan Rickman, Tony Shalhoub and Sam Rockwell as cast members of a space series that has long been off the air. During an appearance at a fan convention, they encounter a group they think are fans in cosplay but who are really aliens (the aformentioned Thermians, whose ranks include Veronica Mars‘ Enrico Colantoni and The Office‘s Rainn Wilson) who need their help solving an intergalactic incident.

RELATED Wes Craven and Syfy Developing People Under the Stairs, Other Series

Robert Gordon, who penned the original Galaxy Quest script, likely will write the series. He’ll also executive-produce alongside the film’s director, Dean Parisot (whose directing credits include Justified and The Good Wife), and the film’s producer, Mark Johnson (Breaking Bad).