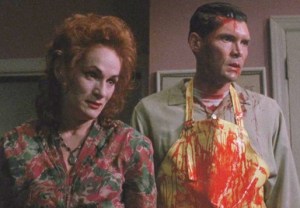 Horror aficionado Wes Craven is teaming with Syfy for a crop of new projects, including the re-imagining of a Craven classic.

First up is a small-screen adaptation of Craven’s 1991 movie The People Under the Stairs, the story of the “centuries-old horrors” discovered at the Robeson Family Manor following the disappearance of a young woman. Craven will executive-produce the pilot, which is being described as a cross between Downton Abbey and The Amityville Horror.

Also being developed at Syfy is We Are All Completely Fine, based on Daryl Gregory’s book of the same name, in which a mysterious psychologist draws out twisted evils from her patients’ pasts. In addition to executive-producing the project, Craven is also on board to write and direct the pilot.

A third series, Disciples, is also receiving the Craven touch. Based on the graphic novel by Steve Niles, who will executive-produce with Craven, the futuristic drama explores what might happen if the world’s wealthiest people begin to colonize the moons of our solar system. (Spoiler alert: It involves a cult.)

All three series are being developed as part of Craven’s newly inked first-look deal with Universal Cable Productions.